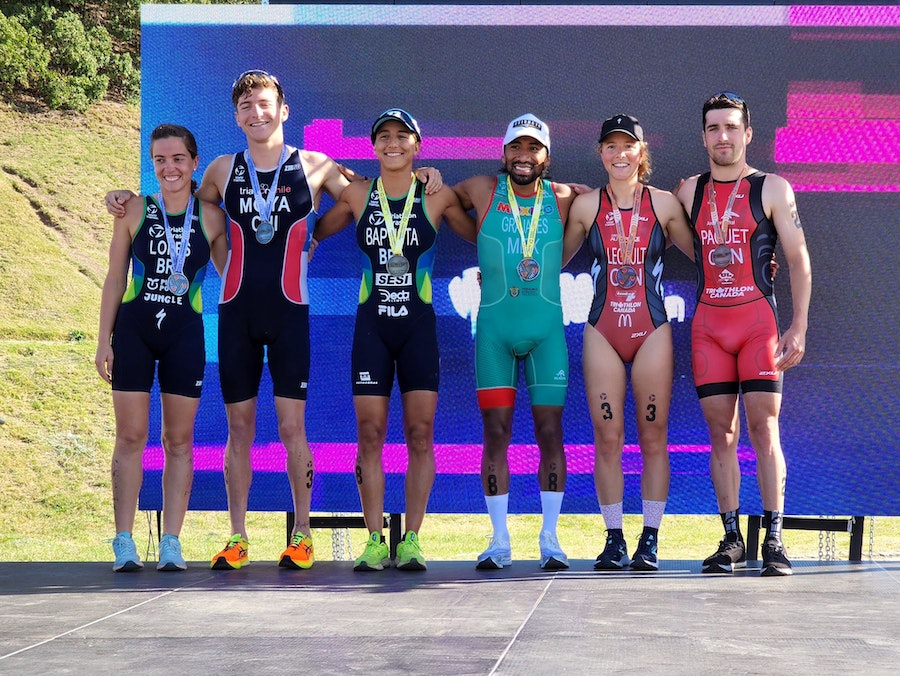 Brazil’s Luisa Baptista is the new American triathlon champion, after an incredible run that saw her crossing the finish line in first place on the 2022 Montevideo Americas Triathlon Championships. Baptista was able to bridge what seemed to be a safe distance with her teammate Vittoria Lopes, who ended up finishing in second place. Canadian rising star Emily Legault claimed the bronze medal.

Lopes dominated the race since the first strokes of the swim, opening a gap of over 30 seconds with the rest of the field during the 1500m swim in the calm waters of Montevideo. She managed to keep the distance with the chasing pack on the bike, but when it all came down to the run, her teammate Baptista proved that she is hard to beat. The fastest run split of the day was enough to take her to the first place, followed on the finish line by Lopes to claim Brazil’s 1-and-2 and Legaul in the third place.

On the female U23 category, Mexico produced a magnificent display to claim a podium sweep, with Cecilia Sayuri Ramirez Alvarez claiming the first place, followed on the finish line by her teammates Mercedes Romero Orozco and Anahi Alvarez Corral.

The new Junior American champion, Noemie Baulieu (CAN), displayed a powerful last meters to claim her second Junior Americas’ title. Silver medal was for Faith Dasso (USA), who was also second in 2021, while the third place was for Maria Lopez Faraudo (MEX),  one of the youngest athletes toeing the start line today, only 17 years old.

On the men’s race, veteran Crisanto Grajales (MEX), two-times winner of the PanAmerican Games, claimed in Montevideo the Continent’s crown eight years after getting on top of the podium on the Continental championships.

Grajales was followed on the finish line by ASICS World Triathlon Team member Diego Moya (CHI), with another solid performance after his bronze medal at the South American Games in Asuncion. Last spot on the podium was for Canada’s Charles Pacquet, who managed to keep his teammate Jeremy Briand behind and claim the bronze medal.

On the U23 men’s race, another Canadian had a great performance to claim the Continental title, Brock Hoel, who had the fastest run split of the day, enough to be worth a gold medal today. Second on the finish line was Brazil’s Antonio Bravo Neto, while the third place was for Ecuador’s Gabriel Teran Carvajal.

Canada claimed as well the gold medal on the Junior race, with Mathis Baulieu -brother of Junior American Champion Noemie- dominating the race to cross the finish line with over 30 seconds over the second men on the finish line, USA’s Braxton Legg. The bronze medal was for Mexico’s Yael Vladimir Gonzalez Melendez.