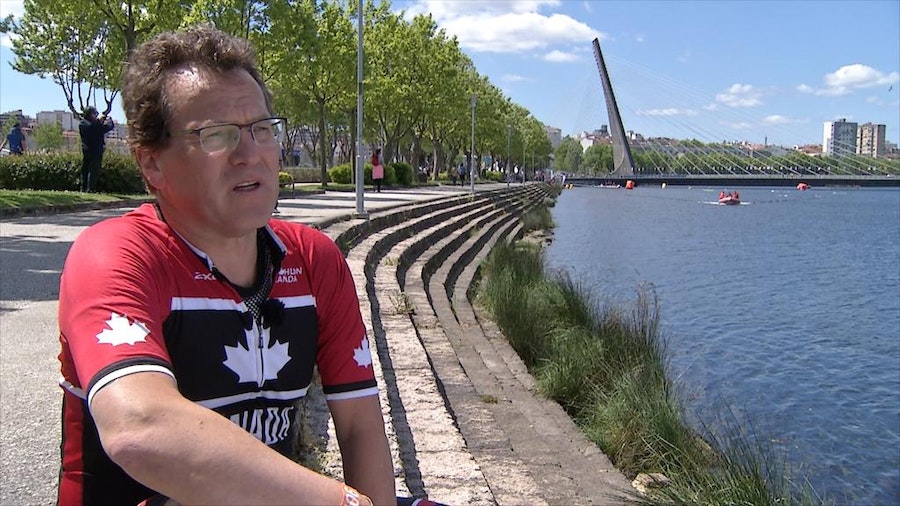 Jeff Shmoorkoff, from Canada, has been in triathlon and multisport for nineteen years.

Jeff Shmoorkoff from Canada has been in triathlon and multisport for nineteen years. The journey began for him when he realised work was taking over his lifestyle and he wanted to get fit and healthy. He lined up for his first duathlon, progressed to qualifying as a top age group athlete to compete at the duathlon championships and progressed to triathlon from there.

Schmoorkoff is a doctor so finding the harmony between work, training and travelling to compete is something the Canadian has worked hard to master. Training for triathlons is his release in a very busy schedule and he loves the countries where the races take him.

Representing Canada and wearing the team kit is something very special for the inspiring athlete, who continues to mentor others in the triathlon Canada team, all vying to line-up and represent at a World Championships level.

The journey
“Well I’ve always been a runner and then I took up cycling touring and then marathons. Then I had to do work so when I worked I gained a lot of weight because I worked too much. I am a doctor and I have many hours. I said I got to try and lose some weight so in 2001 I decided to do duathlon. My inspiration was reading online about a Canadian Duathlon Championship, in a part of Alberta where there’s mountains, and Simon Whitfield did it, that was before the triathlon and that kind of inspired me that I could this and that’s where it started in 2001. That was my first Worlds in 2001.”

The first experience as a world triathlete
“It was fun, we went to Italy. Great time, flat race but a lot of fun and meeting a lot of people and of course, the aspect of touring and seeing other parts of the world. Things like getting a scooter and booting around Italy, my wife was there. We had a great time.”

Starting out in triathlon
“I started out in duathlon first. I have to be honest. The duathletes and the triathletes are a little bit opposed and sensitive about their approach to things and I thought triathletes were a little high intense for me and I’m not a swimmer. So I eventually started triathlon because I had to get more bricks in. I call a triathlon a float and a brick.”

Finding the balance between work and training
“Being a doctor and trying to train is pretty balanced. I try and use the 80/20 rule where 80% of my training is low intensity and 20% is high intensity but that’s basically my races because my highest intensity if my job. I need the sport to give me a release and that’s why the sport is so relaxing for me. It allows me to travel and visit countries and get away from my job.”

The progression of the sport in Canada
“Well duathlon in Canada is certainly more popular in Eastern Canada. I think it’s a difficult sport to develop compared to Europe because there’s not a lot of incentive and certainly the promotion of triathlon is far greater. Duathlon is there, there’s events, there’s qualifiers. You have to look for them, you have to travel. Canada is a big country so we’re travelling all over sometimes, but duathlon is there, the sport is there for sure.”

What it means to be a World Triathlete representing Canada
“When I was a young kid, I played hockey and of course I wanted to be in the Olympic team, like any other kid. Part of me wanted to always represent Canada and when this opportunity came up and you could qualify and travel around the world and wear Canadas flag proud and be with the national team and all that, it means a lot. That’s what a lot of us come and wear the country colours and meet up with people from other countries too.”

Greatest highlight in the sport
“I’ve done this for nineteen years and it’s a hard one to think of. Honestly, doing my very first one in Italy. I went so hard on the bike, I couldn’t walk for two days. Is that a highlight, I don’t know. Just know that you’ve put the effort in.”

Suggestions for developing the sport in Canada
“To improve the sport in Canada, I think we’re doing a good job. The inspiration is the kids in sport so we have to keep promoting these kids. Certainly we want to promote the elite level because that’s what inspires people to watch people at World Championships and the Olympics. Truthfully, for a lifelong balance and fitness we do have to promote the age-groupers because that’s what keeps the sport going and keeps an athlete going. Keeps you young.

Aspirations
“I am always thinking ahead and I am already having to qualify for this year for next year in Almere, Netherlands, I’ve qualified for the sprint there because I want to do all five races so I have four more qualifiers to do and already looking forward to Townsville, Australia, in 2021. Of course having Edmonton, having World Triathlon in my home city, is a big deal.”