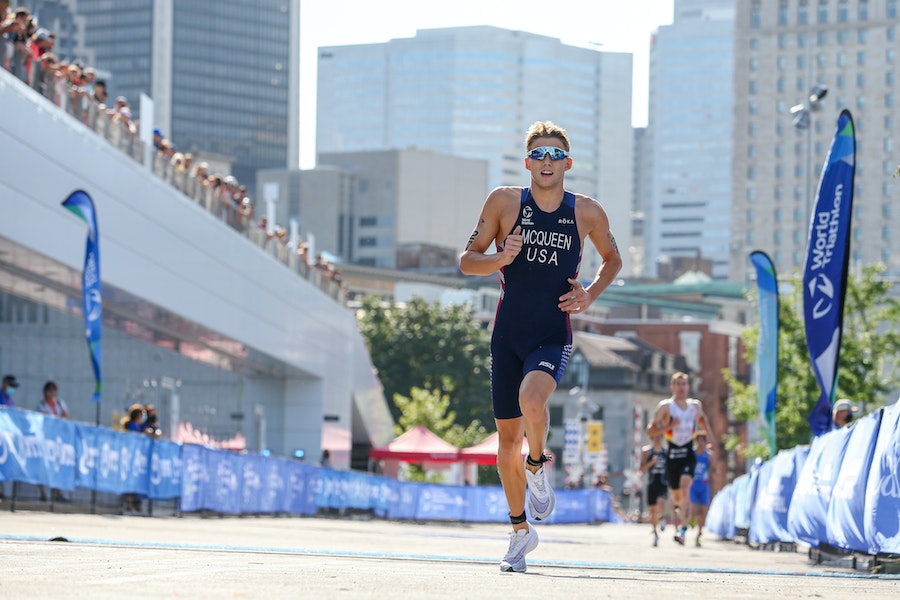 Chase McQueen had quite the World Triathlon Championship Series debut at Leeds in 2021. Leading the swim at the first buoy, by his own admission that frantic starting pace was impossible to maintain and he soon found himself alongside the likes of Alistair Brownlee, Richard Varga and Aaron Royle. In the blink of an eye, the American would be in the eye of a media storm as Leeds’ favourite son was DSQ’d for swim behaviour after an incident between the two.

McQueen, one of the first to come through USAT’s Podium Project seeking out college talent, went on to finish 24th after a brilliant debut race in the top tier. He also shrugged off the swimcident with the maturity of a triathlete who, in the latest episode of the World Triathlon Podcast, has come to learn his impeccable pool stroke may be better suited to carving through clear water than negotiating buoys elbow-to-elbow with five other athletes.

“Like, that’s just the sport of triathlon,” says McQueen, and you can listen to him and U23 World Champion Emma Lombardi on the podcast via Spotify, Apple or Google.

—
“I knew that that was going to be the biggest race of my life for sure. I was just excited for the opportunity. There was a lot of guys on the start list I’ve looked up to for a very long time… and, not that I had an amazing race, but I was in the mix, actually at the front of the race for a little bit.”

As for Chase McQueen’s swim stroke, it is striking to see how it differs from those around him in the opening lap of that WTCS Leeds race. It’s his skill in the water that saw him brought in to help with Morgan Pearson’s build up to Tokyo 2020.

“My stroke is long and, whatever, it’s smooth, but it’s maybe not the best triathlon stroke. Right? My turnover is pretty low. Look at a lot of guys, other really good swimmers like Varga or Vince, and you see a higher turnover, it’s more sustainable. Maybe I should race the Arena Games!”

As for the first experience of life at the top table, the confidence it brought to the 23-year-old was then with him in Montreal. After a first taste of the Elimination format, he was then charged with taking the anchor leg for Team USA in the Mixed Relay. Stepping up after Kirsten Kasper, Taylor Spivey and Seth Rider had left the team well set, McQueen duly dug in to seal the gold.

“I was at the front of the race and I had all the pressure in the world not to let them down because they did such a good job for me, for sure. I think anytime that I am lacking confidence or I’m needing to fall back on… it’s probably the race that I’m most proud of and is probably the best race that I’ve put together in terms of swim, bike, and run. I know it was just a super sprint and it was a relay, but I did gain a lot of confidence from that race. And I think that was a huge stepping stone for me, just knowing again that like I belong here and I, I deserve to be racing at this level and I I’m capable of it.”

A recurring theme is the seizing of the opportunities that come his way. Having waited patiently for his shot at the Series, it isn’t something he is prepared to let slip through his fingers when the competition for places among the US men is so strong. Now ranked fifth, those chances and those start lines should be coming more and more often from 2022 onwards.

“I think that’s kinda what raises the bar. Everybody has to be held accountable because, you know, if it’s not going to be you, it’s going to be somebody else. So if you’re not going to be fit and ready and can’t capitalise on those opportunities that you’re given, then somebody else will. I’ve spent a lot of time with Matt McElroy and Eli Heming and those guys as well. There’s no difference in work ethic. You know, everybody works hard. Everybody is very talented. It’s just a matter of showing up and performing on race day. And I think, luckily for USA triathlon, it paid off in the Olympics.”

For his own Olympic journey, 2022 will be a huge season for Chase McQueen, with WTCS Yokohama the first big goal, the World Championship Finals Abu Dhabi the big end goal, and taking everything that comes in between in his stride.