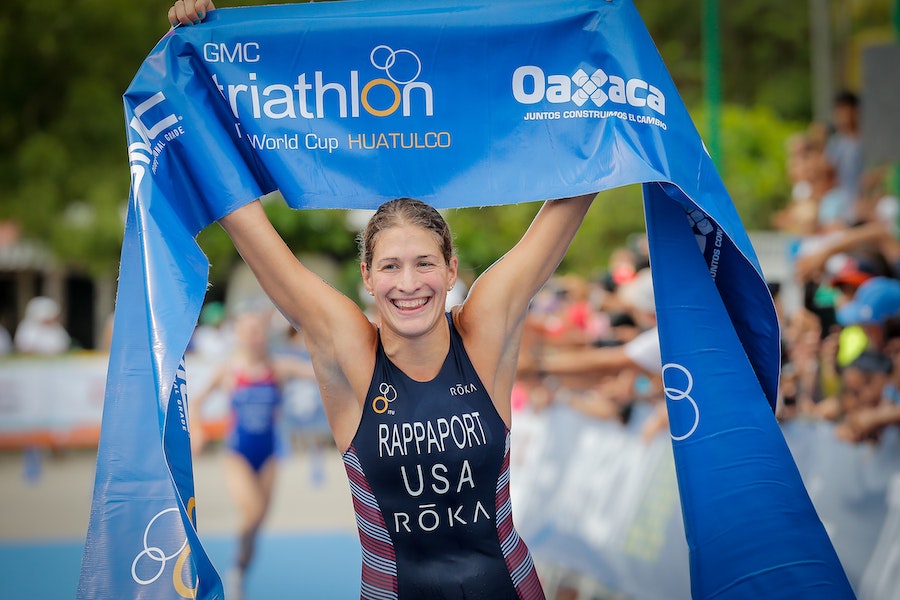 In the firing heat, of the southern Mexican state of Oaxaca, Canada’s Tyler Mislawchuk and USA’s Summer Rappaport executed perfect race setups, to be awarded with the World Cup gold medals.

The elite athletes tested their race best over a sprint-distance course, which featured a 750-metre swim, 20-kilometre bike and 5-kilometre run course. The course was lined with Mexican support which was a showing of their passion for the sport and loyalty to their home heroes of triathlon.

43 elite women lined up along Santa Cruz Bay to compete in the 2019 Huatulco World Cup. The field was a mix of world class experience and up and coming athletes.

Summer Rappaport from USA, who earned the silver medal in the recent World Triathlon Series Yokohama in a remarkable performance, was the top-seeded elite female on the start list in Mexico.

Rappaport was joined next by fellow team member, Kirsten Kasper, who was returning to racing today, after some time out due to injury.

Rappaport, Kasper and Spain’s Sara Perez Sala set their races up well, displaying strength across the 750m open water swim course. A frantic group of over 30-elite women exited the first transition of the day together and were out on the bike course.

Luisa Baptista from Brazil was in the front seat, riding across the first of four laps. Rappaport, Perez Sala and Mexico’s Adriana Barraza were closely tucked in behind, followed by the train of close to 30-women.
Baptista and Rappaport took turns in the lead position and Perez Sala, Kasper, Barraza, Mexico’s Michelle Flipo, Spain’s Cecilia Santamaria Surroca and Australia’s Charlotte McShane were also among the leading group.

The same group of 30-women maintained the pace and worked together across the four-laps of the bike course and with another build-up, they entered transition in a frenzy.

In a hurry out of transition, Japan’s Hiraku Fukuoka and Aoi Kuramoto, Flipo and McShane were looking for an early exit as they flew out onto the run.

Rappaport took control of the race immediately and furiously blazed across the 5km run course. Russia’s Alexandra Razarnova was having the race of her life as she chased after the experienced American triathlete in second position.

The battle for the bronze medal was still up for contention as the likes of Austria’s Lisa Perterer, Kasper and Flipo were hot on the heels of the front runners, 14-seconds down.

Rappaport proved to be unbeatable today and hit the blue carpet, in commanding form, to win the women’s race and claim the 2019 ITU Huatulco World Cup title.
“It was really tough. I came into today wanting to execute on some things at this level, that I want to start doing at the WTS level, as well as getting some more experience in the heat leading into Tokyo because we expect similar conditions to today in Huatulco. My main goal was to have a race that I could be proud of and I am really proud as I was able to execute those things and come away with the win,” Rappaport said.

Razarnova produced the best race of her career and stepped onto the World Cup podium for the first time, wearing the silver medal.

“This is my first podium in a World Cup and I am so happy,” the Russian triathlete said.

Perterer, a top contender leading into the 2019 race, was thrilled with her race and was awarded the bronze medal.
“I love racing here! I really love these conditions. I knew I could sprint and I did it again. I am really happy,” Perterer said.