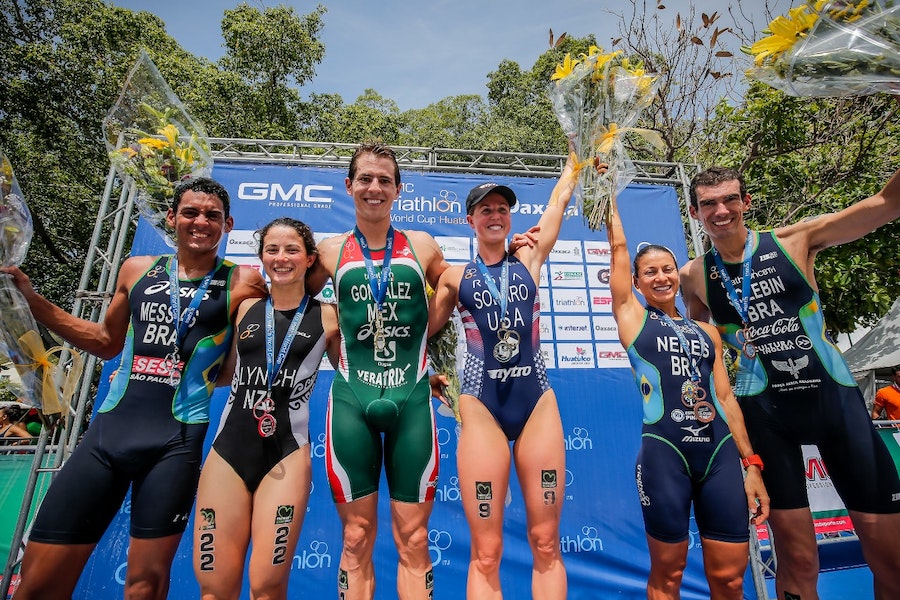 In the 10th edition of the Huatulco ITU World Cup, two new faces brushed the top of the event podium as the United State’s Chelsea Sodaro claimed her first World Cup win of her career in the women’s race. While on the men’s side Mexico’s own Rodrigo Gonzalez wowed his home nation crowd by winning the event for the first time by a dominating run performance.

The seventh-stop of the 2018 season and the sixth sprint-distance race was a fast and furious event as the heat, speed and electric atmosphere made for an exciting day of triathlon that crowds two new champions and saw three new athletes reach the World Cup podium for the very first time.

Women’s Review
The women lined up early in the morning on Sunday to kick off the day of back-to-back sprint-distance races in Huatulco. The starting line began on the sand as the women entered the ocean from the beach with only one 750-metre swim to complete.

Helen Carvelho (POR) exited the water first, but her gap was only a few seconds and the rest of the field followed her into the first transition.

Once onto the bike a larger pack formed tallying over 20 women that included Sodaro, Deborah Lynch (NZE), Beatriz Neres (BRA) and the number one and two on the start list Vendula Frintova (CZE) and Lisa Perterer (AUT). With little change over the four, five-kilometres long laps, the leaders only increased their lead over a small chase pack of four that trailed behind.

Huatulco is infamous for its sunny skies and hot conditions, so as the large group made its way through the second transition, the podium would go to the woman with the freshest legs and who could outstand the heat.

After 2.5 kilometres into the run Sodaro, Frintova, Lynch grouped together and gave a glimpse of a potential podium. However, in the bell lap Frintova succumbed to the conditions and pulled out of the race. With Sodaro’s running background, the final discipline is her strength so she pushed it in gear in the final kilometre to break away and make it into the finish chute to grab the tape and earn her first-career World Cup win.

Sodaro’s background in ITU triathlon started just last year, so to begin a sport and then win a World Cup only a year later is a remarkable feat.

“The weather was a determining factor. I think the people who raced the smartest today were the ones who got the results, I just tried to conserve for as long as I could,” Sodaro said. “First podium, first win I am just so proud of my gold, for my health and the opportunity to be doing this.”

Men’s Review
A large start list of 66 men toed the sandy beach of Huatulco for a chance at claiming the seventh ITU World Cup of the 2018 season.

Diving over the shoreline waves to start the swim, the short course wasn’t enough to break up the field for any frontrunner movements. Although Germany’s Linus Stimmel climbed back onto the beach first, he was moments ahead of a large chaotic swim exit of almost the entire men’s roster.

Gonzalez found himself in the middle of the pack exiting the swim but made up for it in a quick transition.

The Huatulco bike course is on the flatter side, with only a slight incline in the first kilometre. In the first two laps of cycling, the field was split between two large packs of over 20 men. However, the gap between the two packs was only about 10 seconds and by the time the third lap was introduced, the two pelotons had formed to create a 53-man strong group that would enter the second transition together.

With that many bikes and bodies entering T2 all at once, the strategy of gaining an advantage was crucial to those who could transition quickly and get out of the chaos.

That advantage came to Gonzalez as he led into T2 and did a quick change to be the first man on the run.

The run of the men’s race saw some leadership opportunities. Gonzalez right off the bat blasted ahead of the field and created enough space that he could charge forward without any threats. He grabbed onto the lead and never let go. With the help of cheering fans, Gonzalez only increased his lead and soared onto the blue carpet to grab his first-ever Huatulco World Cup win. Making it a meaningful victory as well as Gonzalez competed in Huatulco in 2008 but was lapped out of the competition. Now, exactly ten years later he returned to the same venue to seize gold.

“I am really happy, I was thinking in the morning when I woke up that this was my first World Cup back in 2008 and actually I was lapped at that time. So it is really excited to back ten years after and win this race, because it was a race I could not win before and I am excited to win in front of a home crowd,” Gonzalez said.

It was the Brazilians who came out ahead in the final lap to claim the silver and bronze. Messias came second for a career-best World Cup finish and Sclebin took third who also had a career-best finish and stepped onto the World Cup podium for the very first time.

Another strong milestone finish was from Andrade Figueroa, a member of the ASICS World Triathlon Team, who had a personal-best fourth place.