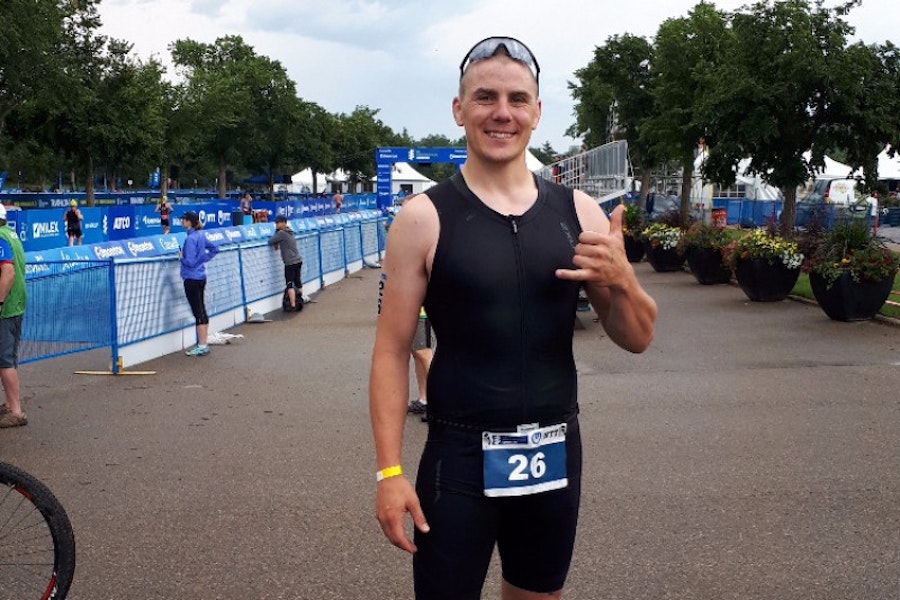 Canadian age group triathlete, Rhys Clark, is highly motivated ahead of the 2018 World Triathlon Grand Final on the Gold Coast this month and proud to be representing his country at a national level.

The Canadian age-group triathlete used the foundations of triathlon, as cross training for his Olympic style wrestling. When he stopped wrestling he moved into the sport of decathlon where he met a triathlon coach and has been mastering the swim, bike and run combination ever since.

Clark, aged 34, is honoured to be representing Team Canada for the sport of triathlon especially at the 2018 Grand Final.

“It is an honour to be able to represent Canada.”

“The challenge of racing and being better than I was last race drives me. “

Do you have an interesting story to share?
I am a Primary Care Paramedic in Calgary Alberta and during one triathlon in a rural town I was swimming and half way through when another competitor had a cardiac arrest beside me in the water. I jumped into the rescue boat and assisted the medics with the arrest all the way into the code room. After I came back to the course I finished the run. That was the only kind of triathlon that I never want to do again.

How did you get into the sport of triathlon?
I started it as cross training for when I used to be an Olympic style wrestler. When I stopped wrestling I got into decathlon where I met my triathlon coach and have been doing it ever since.
What is your favourite discipline and why? Bike. I love going fast, it is my strongest discipline, and I like that I can cross train with track cycling.

What does the triathlon community mean to you?
It is a big community where you can find a lot of like-minded, hard training people who have positive attitudes.

How motivated are you ahead of the Grand Final?
I am very motivated. I have been training very hard. I have been reading medical journals to try and find an edge for my race. And having my name on a Team Canada uniform has made for even more motivation to well, not only for myself but for my country.

Will anyone be there to support you on the day?
I have some friends studying down in Australia that will be there to watch me. My mom will also be there on vacation.

What are you most looking forward to?
Racing, then having a sunset surf the same day.

What does your race morning look like?
It starts with double-checking all of my gear that I had laid out the night before. I shower then eat breakfast, something that will sustain me for the race (eggs, toast, and fruit usually does the trick). I’ll play a song that I want stuck in my head for the race over and over until it’s stuck in there. I’ll go through my race in my head, what I want to do for each discipline, how to minimize my time in transition. I try to keep it as solitary as possible.

Why triathlon?
I have always enjoyed them since I started them 11 years ago. I find them challenging and rewarding. And I like individual bases sports more then team based ones.

Anything else you’d like to share about your triathlon journey?
It has been a challenge being a full time shift worker and a triathlete and these past few months have been especially challenging. My home, work, training life balance has been stressed but my girlfriend has been very supportive of this endeavour.