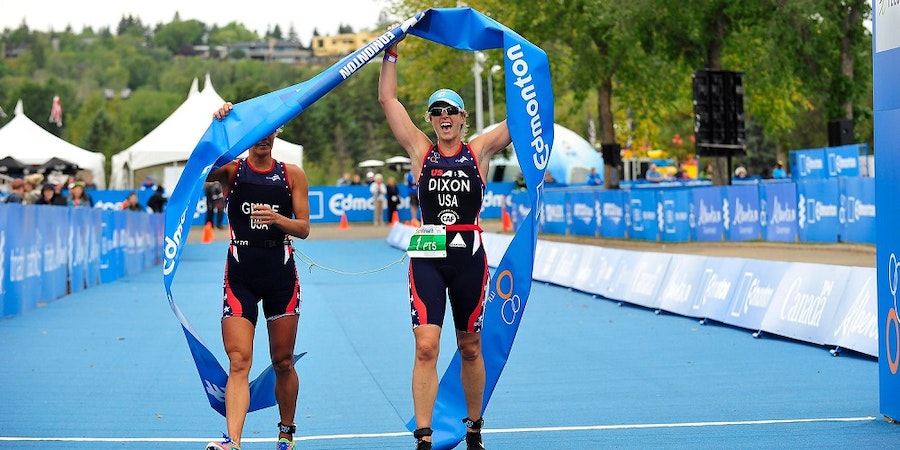 Patricia Collins (USA) returned to the top of the podium for the first time in Edmonton on Saturday since winning the TRI-5 sport class at the 2012 World Championships.

Allysa Seely (USA) furthered her road to Rio with a win in the women’s PT2. Although she exited the water in second, a phenomenal bike and run gave Seely the gold.

“It felt great to finally grab the banner for the first time this season. It was a tough race—it was really cold. But it turned out really well, so I am very happy with it,” said Seely. “My confidence has been building over this season, which is great but I still have a lot of work to do, but the end goal is Rio so I hope I will be there.”

Andrea Walton’s win in the women’s PT3 meant the U.S. women swept gold in all of the sport classes contested on Saturday. Andre Cilliers was the sole male winner from the U.S. team, which he accomplished with a strong bike and run in the men’s PT3 sport class.

But it was Canada’s own Stefan Daniel that stole the show on home soil, winning the men’s PT4 sport class with a line-to-line lead.

While Daniel was first out of the swim and bike, he received strong pressure from France’s Yan Guanter on the first two disciplines with both men coming into T2 together. A swift transition saw Daniel out first, dropping Guanter as a threat to the podium. However, an aggressive Chris Hammer (USA) then took over laying on the pressure as he hunted Daniel down on the run, putting Daniel’s win at risk.

“The swim was a battle, I was battling with David Hill from Great Britain,” Daniel said. “We have come out of the water a few times together, but the swim was good because it was an honest swim. On the bike I felt really relaxed. I just tried to keep a steady pace throughout, and not burst because that kind of takes your legs out on the run. And on the run I think that is the best I have ever felt in a triathlon. It felt like I hadn’t even swam or biked before, I just felt really good,” Daniel explained on his performance. “To win here was really nice, I have done this race a few times and competing on home soil is pretty special.”

Canada was treated to another win in men’s PT5 top finisher Lowell Taylor.

A jovial Giovanni Achenza picked up his second win of the season in men’s PT1 with a monster win, crushing the competition by more than six minutes, while Mohamed Lahna also secured a win in men’s PT2 sport class with a sizable margin at three minutes.