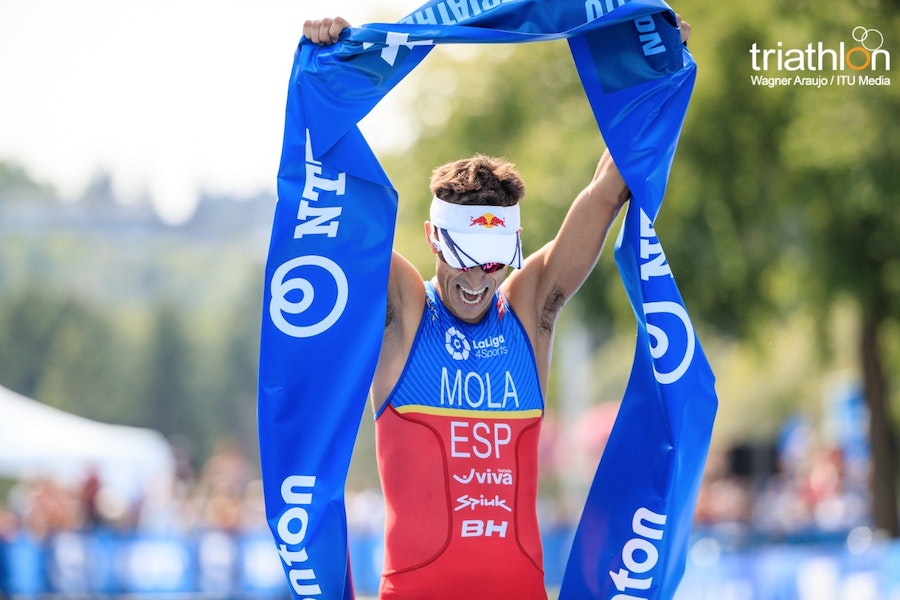 A furious sprint in the last kilometre gave Spaniard Mario Mola his fourth victory of the season after claiming gold in the 2017 ITU World Triathlon Edmonton. Second place was for Australian Jake Birtwhistle, while South African Richard Murray claimed bronze.

A furious sprint in the last kilometre gave Spaniard Mario Mola his fourth victory of the season after claiming gold in the 2017 ITU World Triathlon Edmonton. Second place was for Australian Jake Birtwhistle, while South African Richard Murray claimed bronze.

The race started with Slovakian Richard Varga leading the 750m swim, exactly the way he’s been doing it over the last 30 WTS races he has started.

Only a couple of seconds behind him, a strong group of swimmers followed, with Jonathan Brownlee, Aaron Royle and Ben Kanute included. And almost 20 seconds behind, the Spanish trio along with some of the other contendants in Edmonton, such as Richard Murray or Jake Birtwhistle.

And with all of them grouped in transition, in a matter of seconds a large group of more than 20 athletes was formed on the lead, and stood the same for the 20 km of the new bike course, including a terrific hill on each lap.

Continuous lead changes ended up with all of them arriving together to the transition once more, with all to be decided on the run.

The flat 5km was once more when Mola showed that he is the one to beat this season. Even though this time he was close to be beaten by his training mate, Birtwhistle, who flew past him with two laps to go.

Maybe a bit early, enough for Mola to push hard on the last kilometre and put himself again in first position, to cross the finish line stopping the clock on 54.51, 10 seconds ahead of Birtwhistle, who claimed his third silver medal in his WTS career and showcased the best run of the day. On the battle for bronze, another running specialist, Murray, ended up third, 8 seconds ahead of Jonathan Brownlee.

It was the fourth time Mola raced in Edmonton, a lucky event for him, where he has never been off the podium, even though this was his first win in Edmonton. With his win here, the fourth of the season, Mola leads now the Series Rankings with 3664 points, while Fernando Alarza keeps the second place with 3172. Javier Gomez Noya keeps the third place on the rankings, with 2990 points, followed close by Murray with 2512. With most of the athletes competing again next week in WTS Montreal, the season is hotter than ever.

“I feel fantastic. I did the best I could, I won another sprint distance, so I think I am performing better, doing better on the swim and doing a better performance overall”, said Mola, who has won two sprint races in a row. “I saw Jake moving on the second lap and I thought it was the end of the world, but I could get back to win”, he said.

“I got to the front a bit too early, and suffer for another whole lap, I guess that it was a bit too much”, said Birtwhistle, who literally flew past the leading trio with 3 kilometres to go. “I gave anything I could at the end and managed to keep the second place”.

“It was pretty hot and tough conditions here, but I managed to do the podium, so Edmonton is still a good race for me. It’s my third weekend in a row racing, so I’m pretty happy”, said Murray. “When Jake passed by me I thought wow, he is going to win if he can keep that pace for another lap”.