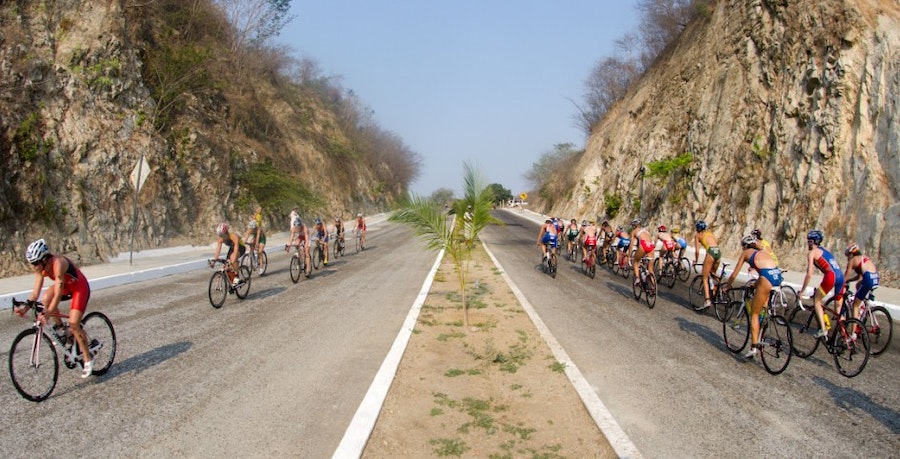 As the third race left in the official Olympic qualification period, the Huatulco ITU Triathlon World Cup always had the potential to impact the Olympic simulation in a major way. And while it didn’t have a dramatic impact on the battle between the NOCs looking to field the maximum three athletes, the results did have a huge affect on some individual athletes rankings. It’s time to delve into the Olympic simulation to see what Huatulco meant, and what to watch for this weekend in San Diego. Click here to read the Olympic Qualification 101.

Women’s Olympic Simulation
The swim played a crucial part in the elite women’s race in Huatulco, and it was a group of seven athletes who managed to make a break.  Together Flora Duffy (BER), Pamela Oliveira (BRA), Claudia Rivas (MEX), Alexandra Razarenova (RUS), Line Jensen (DEN), Yuko Takahaski (JPN) and Margit Vanek (HUN) worked to stretch their lead each lap in the bike to build a lead of three and a half minutes over the rest of the field. But their intense work rate to make that gap wasn’t surprising when looking at the Olympic simulation before Huatulco, six of them were sandwiched close together and a good result would help them get to London. For the winner, Duffy, the points earned helped her rocket up 16 spots in the simulation and is now in 39th spot, and all but secured a spot for Bermuda. Rivas sits one spot behind her in #40, Jensen in #42 and Oliveira in #47. Razarenova also further improved her position, to #37 on the ranking. While it means they all still need to race well in San Diego and Madrid, they are all now in better position to qualify a spot for their NOC in London. Same for Ukraine’s Yuliya Yelistratova and Slovenia’s Mateja Simic, who finished seventh and eighth respectively in Huatulco.

Looking ahead to Friday’s race in San Diego, keep an eye on the European new flag, Kaisa Lehtonen now holds that for Finland, but just is just 30 points ahead of Austria’s Lisa Perterer. It’s also an automatic selection race for the USA, and a top-9 finish for any U.S. women - outside of the already qualified Sarah Groff or Gwen Jorgensen - will get them to London.

In the battle to decide which NOCs can send three athletes, nothing much changed in Huatulco but Daniela Ryf will be looking to put herself and Switzerland back in contention on Friday to field the maximum. Ryf is Switzerland’s third woman, and they are currently sitting in ninth, which means right now only two spots are qualified. But if Ryf can overtake Germany’s Kathrin Muller or even both her and Svenja Bazlen – who are sitting next to each other on the points table – Switzerland will be in. Given neither of the Germans are racing, Ryf needs just needs to finish in 14th place to put the Swiss ahead of Germany. In terms of individual placings, Huatulco threw up several interesting changes for the London startline. In the overall rankings, Belgium’s Simon De Cuyper moved himself into Olympic calculations in a big way with his win. He moved up 26 places to now sit in 48th place. Also interestingly, his countryman Peter Croes moved up into the final place on the qualification list, so right now Belgium have two men’s spots in London. Both will race in San Diego. Other big moves were Bermuda’s Tyler Butterfield, who moved up 22 spots to hold the 45th Olympic spot, Italy’s David Uccellari who continued on his form from Ishigaki to be in 44th, and Ukraine’s Danylo Sapunov who put himself into 38th spot with Huatulco bronze.

Israel’s Dan Alterman moved his NOC into the European new flag place with his 23rd place in Huatulco, but Slovakia’s Richard Varga and the Netherlands Jan Van Berkel are within striking distance, just 13 points separation. Alterman currently has 762 points, Varga 755 and Van Berkel 749. That 13 points is the difference between 21st and 22nd place in San Diego, where Alterman and Van Berkel will both race.  The Americas new flag race will also continue in California, with Gonzalo Tellechea who holds it now for Argentina and Carlo Javier Quinchara Forero, from Colombia, who is just behind him.

In terms of nations that can qualify three places, the only difference in the placings in Huatulco was Ryan Sissons’ silver medal, his World Cup first. That earned him over 400 points, and meant he went from New Zealand’s third athlete to its first and means that New Zealand have moved from a dangerous place to a fairly secure one in the race to send the maximum. As Sissons has already been selected in the team, alongside Bevan Docherty and Kris Gemmell, it basically went a long way to securing this own place at the Olympic Games. Joao Pereira‘s DNF meant that Portugal didn’t claim the points needed to put a further gap on Australia and Canada. Portugal are currently sitting in seventh, Australia in eighth and Canada in ninth, and it would seem the fight for seventh and eighth place will now come down to those three nations.

That all sets up a crucial battle in San Diego, as Courtney Atkinson, Simon Whitfield and Pereira will all race. Whitfield (CAN) and Atkinson (AUS), who are the respective third athletes from their NOCs, are therefore responsible for where they sit in the simulation. Right now Whitfield is just 64 points behind Atkinson, the difference between 11th place and 14th, and Atkinson is just two points behind Pereira.

Finally at least one Olympic berth will definitely be decided in San Diego, with the top-placed American man - regardless of placing - automatically earning a place in London. If two men finish in the top nine in San Diego, they will both go to London. With this in mind, keep an eye on Matt Chrabot, Manuel Huerta, Jarrod Shoemaker and Hunter Kemper. Kemper could become one of the few triathletes to qualify for four consecutive Olympic Games, alongside Whitfield and Germany’s Anja Dittmer who have both already been selected for London.