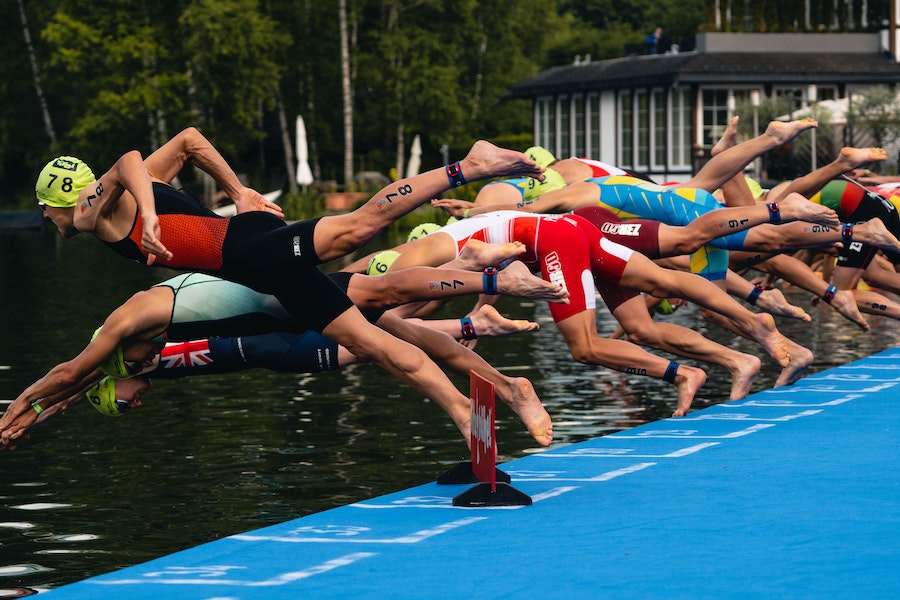 The elite fields were stacked heading into the race finals of the 2021 Europe Triathlon Sprint and Relay Championships Kitzbühel. Among the stars was Switzerland’s Nicola Spirig, 2012 Olympic and six times European champion. In the women’s race Great Britain’s Olivia Mathias, Sian Rainsley and Sophie Alden were first out of the water, followed by Quinty Schoens (NED) and Valentina Riasova (RUS), Germany’s Laura Lindemann and Emma Lombardi (FRA). During the bike Lindemann immediately made a statement, putting the pace on the field. In T2 the leading group arriving together, Jolanda Annen (SUI) was first on the run but Germany’s Marlene Gomez-Islinger and Lindemann were on her heels and chasing. Mathias, Spirig and Schoens with seconds between them. Leonie Periault from France lead the women’s race after the first lap followed by Riasova, both trying to breakaway from Lindemann (GER) who was pushing the pace across the course. None of the other women had the legs to keep up with Lindemann, who races to victory in Kitzbühel and was crowned the 2021 European Triathlon Champion. In a thrilling sprint finish to round out the podium, second place and the silver medal was awarded to Valentina Riasova (winning the U23 European title) and Leonie Periault took home bronze.

In the men’s elite the swim was led by Italy’s Alessio Crociani and Nicolo Strada, together with Hungary’s Mark Devay who tried to breakaway but the group of chasing athletes had no intentions of giving them the chance to take charge of the race. The chasing group in the second lap made contact with the leaders and they all came together into the second transition. Frenchman Tom Richard produced a slick transition to run out first, behind was Great Britain’s Samuel Dickinson, Frenchmen Paul Georgenthum and Arthur Berland, Italy’s Nicola Azzano, Hayden Wilde from New Zealand and Ricardo Batista from Portugal. Switzerland’s Max Studer took control of the race after the first lap on the run with Antonio Serrat Seoane from Spain and Wilde, who wasn’t eligible to claim the European classification. Max Studer dominated the final stage of the run and was the first athlete to hit the blue carper with the fastest run split of the day (32:03), to be crowned the 2021 European Triathlon Champion in Kitzbühel. Antonio Serrat Seoane claimed silver and Tom Richard earned the bronze medal.

Replay the races on Triathlon;LIVE.tv