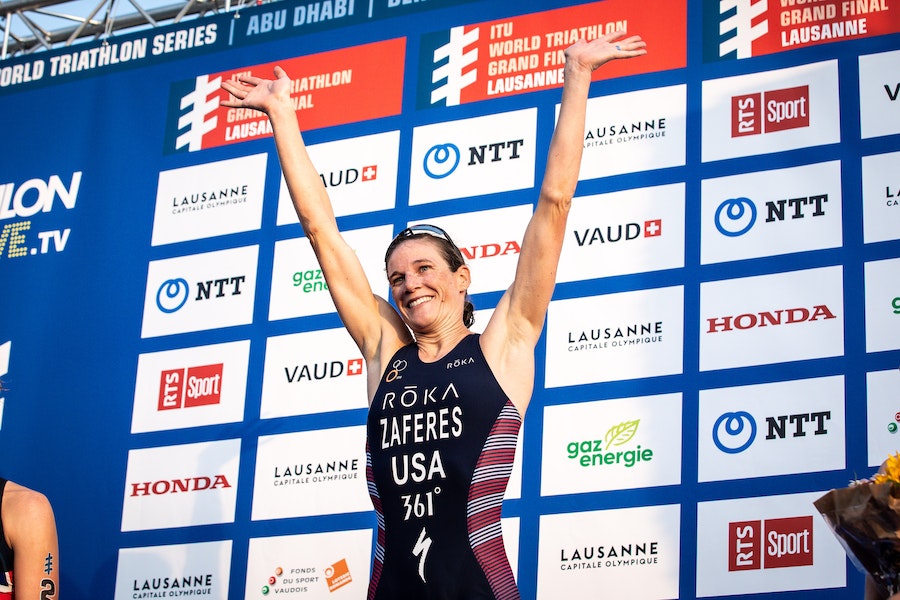 For the thirteenth episode of the World Triathlon podcast, USA’s 2019 World Champion Katie Zaferes dialled in from her family home in Maryland as she begins the road back to being race ready, albeit with great uncertainty remaining about the chances of travel from the US to Europe for the postponed WTS Hamburg on 5-6 September.

“We’ve had a good five weeks of solid training, and we’re not usually base training for, like, 6 months, so we had a down week to make sure that whatever the remaining time is to possible racing I had a break mentally and physically,” she said.

“Right now, as Americans we aren’t allowed to travel to many places, including Europe… it’s very strange being less than a month away from a race and having no idea if we would be able to travel or if there could be quarantine for two weeks. Im excited to see the changes to the course but as (coach) Joel Filiol has been saying, any racing is good racing.”

During the downtime at home, with so much going on in the world and an unusually high level of exposure to news in the US and beyond, Katie has been reading up on history and, in particular, the wider conversations around the Black Lives Matter protests across the United States.

“Ive been doing a lot more reading of history and taking note of the racial issues happening in the world… part of being home makes it unavoidable, as it should it be. I think that, before, i’d get overwhelmed by it all whereas now i realise you don’t have to fix everything but you do have to play the part that you can. As triathletes we train and race to get uncomfortable, but you also train to understand you can only control the controllables and I think that comes into my personal life with everything going on in the world too.”

The extra time to think has clearly had positive as well as occasionally negative impacts for Katie over the past few months, but there is no doubt that the burning optimism to get back out to doing what she does best is as bright as ever.

“Ive had moments of feeling lost and questioning what i’m doing… but I think my overall feeling is still more positive. Im glad the Olympics were postponed not cancelled, i’m just glad there’s still that shot and that clear direction still to aim for. I love reflecting on races and what went well and what didn’t, then working on the mental side of it and trying to figure things out in training. I enjoy writing out my goals and when I haven’t been, Joel will even ask me to show him I’ve been doing that because he knows it is so important to me.”