History made at National Duathlon Championships

By Trinidad and Tobago Triathlon Association | 15 May, 2013

Even though there is no such thing as World and National Records in Triathlons and Duathlons as each Race course is different, there are certain Benchmarks. In Trinidad those Benchmarks are a finish time of two hours for a standard duathlon and a one-hour finish time for the juniors in the Sprint distance, which is half of the Standard.

While Ancil Greene reclaimed his title as National Champion as he came first in the standard distance, he just missed this Benchmark with a time of 2hrs 2mins 49sec. The new National Junior Champion Avinash Anamalay on the other Hand took matters in his hand and with an impressive sprint and his eyes glued to the clock in front of him he managed to finish in a time of 59mins and 36seconds. He has with that become the first Trinidadian Duathlete to crack the one Hour Benchmark. The pride was obvious on his face and shared in the finish area with his Teammates, Coach and Family.

The race was started a few minutes late by the Mayor of Port of Spain Louis Lee Sing, who enjoyed the Company of these athletes and had some encouraging words to give them on their way. The course took the athletes along the fence on the northeastern side of the Savannah as far as Jerningham Avenue to come back, pass the Transition Area and to the western turn just before the hollows. 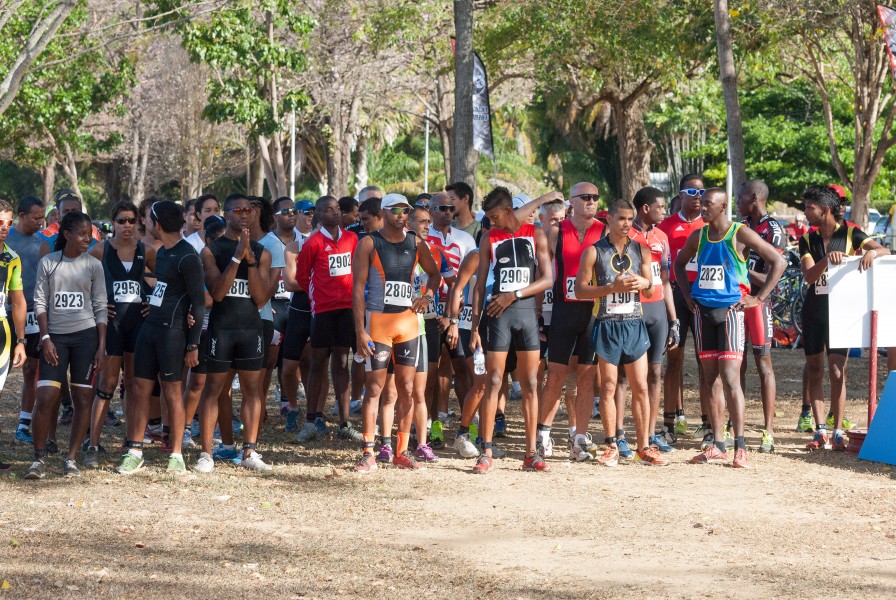 After the juniors did that lap twice and the seniors four times it was time to hit the road with the bike…accompanied by police motorbikes the Athletes set out and did their Laps around the Savannah.

After less than an Hour Avinash, like he already had used up all the Products from GNC he found in his Race Kit reached at the finish. Behind him was Kent Costa in 1:09:24 who started in the 40-49 Years Age Group in second place and Youngster in the Juniors Joshua Ho with an impressive 1:09:49 .

In the Female Junior Category Rene Chin Lee seized her first National Title as Duathlete in a time of 1:17:56. This is her second title for the month as she also has won the Tri The Spice Triathlon on the Easter weekend. Behind her was Chelsea Mohammed in 1:32:29.

In the Standard Distance the first one to emerge at the finish line was Ancil Greene in a time of 2:02:49 followed by Kirk Hearn with 2:06:59 in second Place and Jonah Camps in third place with a time of 2:07:53.

The women’s race was dominated by veteran Diane Henderson in 2:47:04, she added yet another national title onto the long list she already has. Diane also has given the federation a trophy for the first female duathlete in the standard distance to encourage athletes to step up to the challenge and go for the distance. She handed that trophy herself to second placed female Thais Gutierrez as she of course refused to keep it herself. Third placed woman was Iola Pierto in 3:09:54.

The Federation’s President, Stan Patino, himself stepped up to the challenge and completed the standard course in 3:14:22

Sebastian Bos fulfilled all expectations in the 13-15 years age group and came in first place followed by Lorenzo Orosco, while Lily Stauble was the first female. Jordan van Reeken placed sixth overall, while Emma Chin Lee placed eight overall. In the highly contested 11-12 years age group, Jean-Mark Granderson was able to emerge as the winner ahead of Robert Godfrey and Fin Bos.

Stefan Stuven, last years 8 and under champion, has moved into the 9-10 year age group. After a fierce battle with newcomer Troy Llanos, Stefan was able to get the better of Troy and held on to his first place with Troy in second and Kristian Urquart in third. The first girl was Sarah Godfrey, fourth overall, followed by Shantel Mason and Kaya Rankine Beadle.