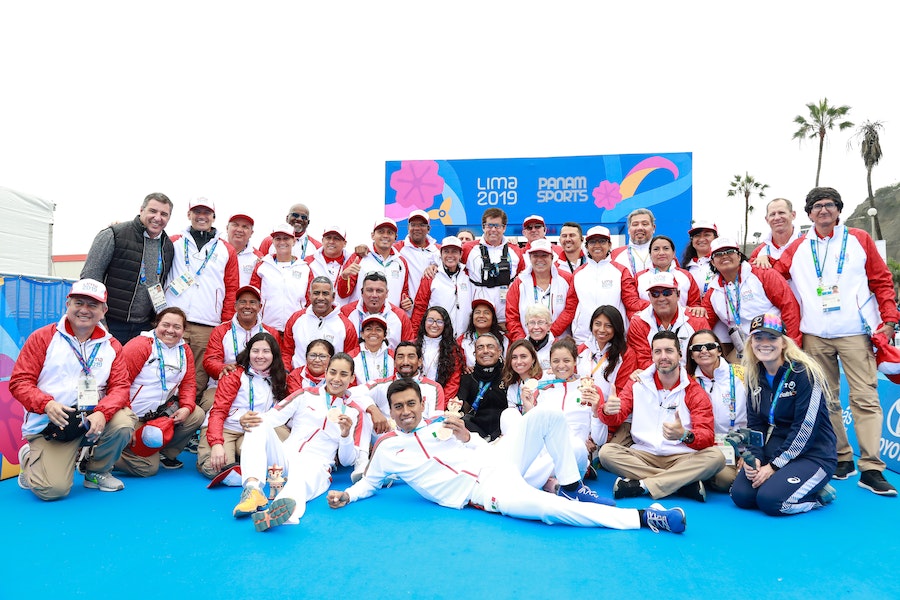 The Technical Official team are key to the operational delivery and success of World Triathlon events, ensuring that an event is run in accordance with the World Triathlon standards, competition rules and athlete safety and justice top of task. Before we launch into Tokyo, let’s reflect on the 2019 Lima Pan American Games which was made up of a team of 36 Technical Officials, delivering the competition, representing 20 nations and including 18 women, 18 men and 10 members from the host nation of Peru.

International Triathlon Union would like to thank and acknowledge World Triathlon Technical Officials, for their contribution and commitment to the sport.

Martha Yeo | Cancun
“I did my first triathlon in 2005 and fell in love with the sport. I got involved as a Technical Official in Cancun because my kids were doing triathlon and wanted to fully understand the rules. I really enjoy being able to provide a wonderful race for the athletes. I love the fact that at the same venue we have age-group, junior and elite athletes. I love that it is a family oriented sport. It has given me the opportunity to travel, to learn many things in different areas and of course, to meet wonderful people. I try to give back by sharing knowledge and experience with new officials. Also by keeping updated by learning new things that can be useful in a race, by understanding, problem solving and being proactive.”

Felix Molina | Mexico
“As an official, I have been involved in the sport for 12-years but prior to this I used to race.
As an official I get to know a lot of people from different countries and different cultures and you learn from everybody.

I really enjoy being involved in major events like Pan American Games. I didn’t work as an official here in Lima, I came as part of PATCO(American Triathlon Confederation). I have had the honour of being involved in 2 Pan American Games and 2 Olympic Game sand 2 Youth Olympic Games and it was great to see all the colleagues here in Lima, who most of them I have had the honour to teach and guide them as a technical official through their training.

In Mexico the sport has grown so much. 10-years ago we had 10,000 members of the national federation and now we are at 20,000 members with events every weekend and around the country. The results of the Pan American Games, with the heroes of Mexico performing so well, sets such a great example of the kids and juniors who are coming into the sport.”

David Markham | Canada
“The Pan Am Games is a massive undertaking for Peru. The sport managers at the triathlon venue worked tirelessly to deliver an event to make Peru proud. It is obvious they accomplished this. The national federations sent us their best technical officials. It was an honour to lead this team with my co-Technical Delegate Leslie Poujol-Brown. For me, these experiences are more than just sport, but the connections we make with others and lessons we learn in order to be the best we can be. I’ve been involved with Triathlon since 1983 and each event I’ve attended has delivered on this with Lima 2019 being no exception. I’d like to thank the Sport Competition team for working magic in getting all we needed in place to stage an enviable event on a beautiful site. I wish them well as they move forward with organizing a World Cup this November.”

Yan Therrien | Canada
“After many years of competing as a triathlete and many more working as a volunteer official to many local, national and international triathlons it finally pays off to be selected as one of the Technical officials for the Pan American Games. Up to 2 officials per country are selected except from the host country where more are taken to help with the local aspect of it.

“One of the best part of these games is to make new friends officials and to meet new athletes. There is a bonding that comes from the friendships that the Games creates. Lima has been embracing the Americas for the week and will continue as we all go back to our homes with another great experience to add to our baggage of stories to tell family and friends.
The triathlon world is my second family and it is growing every year and after every event I attend.  I am looking forward to see them again at another triathlon, in another part of the world. After living a great experience like this one, it makes me want to do more for the sports and more to pass on the experience I gained to other officials. To all my triathlon friends, see you soon at a triathlon near you!”

Gergely Markus | World Triathlon Sport Director
“We have just finished with the Pan American Games. I would like to thank everyone involved with the event. Special ones go to Leslie Puyol Brown and David Markham for their leadership with the project. We are looking forward to return to Lima in a few months’ time as part of the World Cup circuit. Wishing all of you the best on your next officiating assignment, no matter if it will be national in your own country or international somewhere around the world! Thank you to the triathlon technical officials all around the world.”

Technical Officials | Development
The International Triathlon Union (ITU) has a number of sport development educational programs in place that are designed to facilitate all levels from grassroots to Olympic Games level. Find out more by visiting the website.

World Triathlon is proud to launch the Virtual Open Hours for National…
7th November 2021, still feels like yesterday and the memory of the 2021 World…
The elite fields were stacked heading into the race finals of the 2021 Europe…
more news →