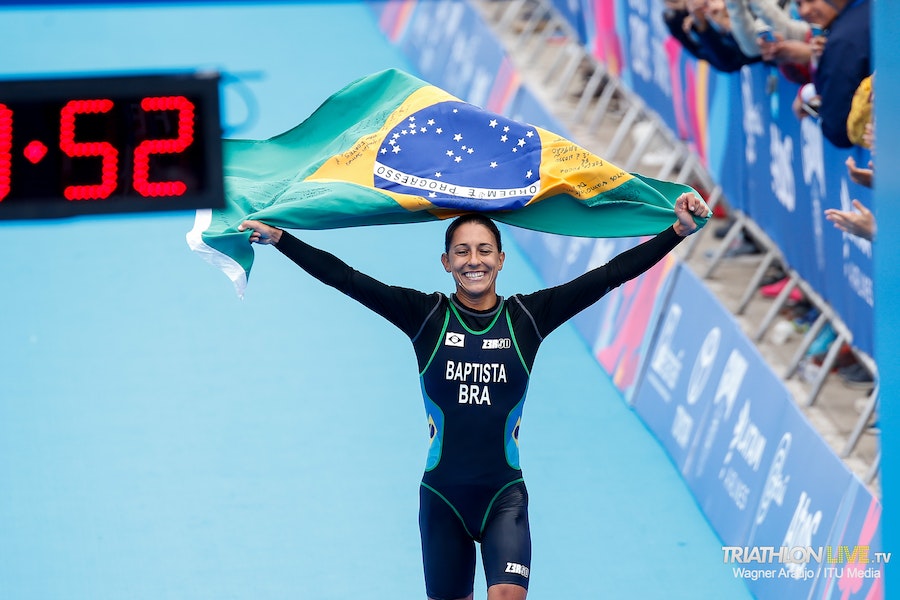 On the opening day of the 2019 Pan America Games in Lima, Peru, the top triathletes in the Americas took to the stage, to represent their country and compete. Triathlon was the second-medal event of the Games, with the marathon events being awarded the first medals.

The elite women’s triathlon event opened the schedule with 33 elite women lining to contest across the Olympic distance race format which consisted of a 1.5km open water swim (2-laps), 40-km bike course (6-laps) and finished with a 10-km run (4-km) which encircled the venue of Playa Agua Dulce.

Brazil’s Vittoria Lopes led out of the 1.5km ocean swim and into the first transition. Lopes had opened up a 1-minute gap on the rest of the field and rode out solo.

Race favourite and fellow Brazilian Luisa Baptista and USA’s Avery Evenson were the next women through transition and out onto the 40-kilometre bike course. A group of sixteen women followed as they flurried out of transition and set out for the bike stage of the race.

The course featured a challenging hill, which tested the field of athletes over 6-laps. By the second lap of the bike course, the gruelling climb had already separated the field of women as Lopes extended the gap by over 1-minute on the chase group which included Baptista, Chile’s Barbara Riveros and Mexico’s Claudia Rivas and Cecilia Perez. By the third lap this chasing cluster of elite women had closed the gap under 50-seconds behind Lopes.

The Brazilian triathlete continued to showcase her leg power as she pedalled across the course solo.

Riveros, Evenson, USA’s Sophie Chase, Rivas and fellow Mexican Jessica Romero were all in the mix of the second group.

By lap 5 USA’s Chase, who was one of the first women out of the swim, lost touch with the chase and pulled back slightly from the group.

The rest of the field were spread out across the course. The Pan American Games attracts a field of experienced triathletes as well as athletes from nations where triathlon is still developing, therefore their level of race experience differs significantly.

By the bell lap Lopes was still proving a force to be reckoned with as she maintained the impressive 50-seconds lead. Lopes produced a fast second transition and moved out onto the run course. On the charge behind was Baptista, Riveros, Rivas and Chase.

The third group of elite women into transition included another strong Brazilian, Beatriz Neres and Romero.

Lopes continued to stride across the run course to lead the race. This was her debut at the Pan American Games and the Brazilian was displaying powerful form.

The hunt for the medals between the elite women remained open and Baptista, Perez, Chase and Rivas. Baptista made a break in the final stage of the run, overtook Lopes to take control of the race. The pressure was on in the final kilometre as Perez maintained her running form in third place.

In a dramatic finish Luisa Baptista from Brazil, proved why she was the top-seeded female leading into the 2019 Pan American Games, ran her way to victory and received the gold medal for Brazil.

“It will be very emotional to wear the gold medal. It’s a success not only for me but for all the people around me. My family is here and it is very special. I was very confident in my run. I knew I could do it, it was an amazing race. I am very happy for this,” said race champion Baptista.

Vittoria Lopes, who produced a perfect race combination to lead most of the race, crossed the line and was awarded the silver medal, establishing two spots on the podium for Brazil.

“I was fascinated with the competition. I am so happy to represent Brazil with my friend Luisa (Baptista). This is my first Pan Am Games and I have a long way to go. I worked hard on the bicycle. I knew the competition would be tough.

An impressive performance by Mexicos’s Cecilia Perez earned the bronze medal, capping the elite women’s podium at the 2019 Pan American Games in Lima.

“It is so exciting. I worked very hard to get this result. I talked with my coach a lot about getting a gold medal, but being on the podium is a good taste in my mouth. I wanted to start in the lead but I raced in the chasing group instead. The idea was to race smart because I knew there were good runners in the group.

“I knew that Baptista would give her all, but I tried to fight until the end,” said Perez.